There are several features that can be found on Mosin Nagant rifles that will help eliminate the possibility of a history connected to the Spanish Civil War. These include a post-1937 date, modern import stamp, any marks of Finnish origin, and the stock type.

Post-1937 date:
Many of the M91/30 type Mosin Nagant rifles that were sent by the Soviet Union to the Republican Spanish forces were new production rifles, made only months prior to being shipped to Spain. Therefore, common dates on Spanish Civil War Mosin Nagants will include 1936 and 1937 dated specimens. However, any rifle date past 1937 cannot be included within the category of Spanish Civil War Mosin Nagants. The last positively reported delivery of Soviet produced rifles took place in early 1938.[1] While there is a slight chance that this shipment may have included some 1938 dates rifles, there has never been a 100% verified example of one of these rifles produced. One such example of a possible 1938 dated SCW M91/30 is owned by the author of this website, but it is still not a 100% conclusive example.

Regardless, it can be said with 100% certainty that any rifle dated 1939 or later has absolutely no chance of being a Spanish Civil War vintage example. The Spanish Civil War ended in April of 1939, and the Soviets had stopped their arms shipments sometime prior, seeing it as a lost cause. Therefore for your rifle to fall within the category of a Spanish Civil War rifle it must be dated 1937 or earlier. Of course, you should remember that it is even possible to find Spanish marked Model 1891 Mosin Nagants from as early as the 1890’s![2]

Modern Import Stamps:
At the time that these Spanish Civil War rifles were imported into the United States there were considerably different gun laws on the books. Today, imported arms must have an import mark placed on the rifle, usually stating the caliber, rifle type/country of origin, and a serial number. However, all Spanish Civil War Mosin Nagants were imported long before these rules came into place in the 1960’s. Therefore, if you’re rifle does have an import stamp of any kind, it cannot be a Spanish Civil war rifle.[3]

Finnish Markings:
Perhaps the only other source of Mosin Nagants besides Spain, prior to the vast amounts of arsenal refurbished rifles now coming out of the Ukraine, was Finland. Often it is easy for collectors to get the two rifles confused. Both Finn-captured and Spanish Mosin Nagants appear as non-refurbished, keeping many of their original parts, having a very well used look, and even lacking import marks. However, the Finns had several markings that help distinguish them from Spanish Civil War rifles. The most obvious of all of these is the “SA” stamp, showing Finnish Army ownership of the rifle, which was applied to the majority of Soviet rifles that ended up in Finnish hands. Any rifle with an “SA” mark cannot be from Spain. There is no evidence, and little chance, of the Spanish selling off any of their rifles to Finland, so it would be impossible for any rifle of Spanish Civil War vintage to have a marking of solely Finnish origin.

Stock Type:
The type of stock found on your rifle will also help determine if it was a Mosin Nagant that came from Spain. The Soviets went through several different types of stocks over the course of the production of the Mosin Nagant. At the time of the Soviet shipments to Spain the type of stock on the rifles would have had screwed in sling escutcheons. After the German invasion of the Soviet Union in 1941, a switchover was made to what is known as the “wartime stock”. This stock lacked the screwed in sling escutcheons in the butt stock and had only a small piece of metal to protect the front slot. At the close of the war the Soviet’s began to use a stock with stamped in sling escutcheons. Therefore, if your rifle is in a wartime or postwar stock, it is probably not a Spanish Civil War vintage rifle.[4]

[1] Howson, Gerald. Arms for Spain: The Untold Story of the Spanish Civil War. New York: John Murray Publishers Ltd, 1999., 298
[2] http://www.surplusrifleforum.com/viewtopic.php?f=180&t=97162
[3] Note: the earlier mentioned “Made in USSR/URRS” mark actually would fall under this category, but this is discussed within that section of the website.
[4] Of note: It is possible to have a Spanish Civil War rifle in one of these post-1941 stocks. Many of these SCW Mosin Nagants were sporterized after being imported, which often included having the rifle’s original stock cut down to make a hunting rifle. Often collectors will buy these rifles and simply place the barreled action in whatever Mosin Nagant stock they can find. In this case the barreled action will still be vintage SCW, but will no longer hold any real collector value. 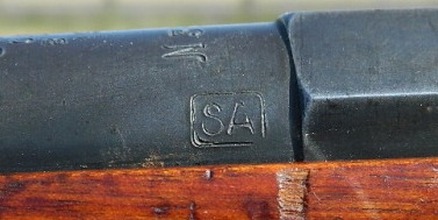 This is an example of an “SA” mark on a Finnish captured rifle built by the Soviets. [Photo provided by ‘Pahtu’ of the 7.62x54r.net forum]

This photo offers a comparison between Pre-War and Post War Mosin Nagant stocks. Note the pre war stock (left) has screws to hold in the escutcheons, while the post war (right) escutcheons are stamped. A wartime stock will not have escutcheons over the sling slots. [Photos provided from the author’s collection]