Unlike the vast majority of Mosin Nagant rifles imported today, rifles of Spanish origin will not have any features typical of the post World War II Soviet refurbishment program. This refers especially to M1891/30 rifles. In order to determine if your rifle has not gone through a Soviet refurbishment there are several key features to look for.[1]

Perhaps the most key feature to look for will be on your rifle’s rear sight base. Prior to 1940, the rear sight base of an M1891/30 rifle was held in place via a dovetail and a small screw at the rear of the base. This system was kept in place until 1940, when the Soviets began using two pins on the side of the rear sight base to hold it in place. During the Soviet refurbishment programs of the post-World War II era, most of these rifles that were missing these pins had them installed in order to bring the rifles up to date.[2] As a result it is more difficult to find M1891/30’s with rear sights held in place by the original method. Since no Mosin Nagants that went to Spain would have received this upgrade, the lack of the two pins is an important feature to look for when determining if a particular rifle may have been imported from Spain.

Another feature to note will be on the stock. On Spanish origin M1891/30 rifles especially, it is common to see the original stock cartouches still on the stock. This is of course assuming that the Spanish didn’t sand or completely replace the stock in the first place. During the Soviet’s refurbishment process most of the rifles in their possession had their stocks swiped out for a different rifle’s stock, or had the stock sanded, destroying stock cartouches.

[1] It is important to take note that all of the following information can also be true of Finnish captured rifles as well. As such it is important to make sure the rifle in question also has several solely Spanish features to determine if it may have Spanish history
[2] http://7.62x54r.net/MosinID/MosinFeatures02.htm, “Soviet M91/30”

Here is a photo comparison of the two types of rear sight bases. Note the base on the left, off a 1936 Tula of Spanish origin, lacks the two pins found on the Soviet refurbished 1925 Tula on the right. [Photos provided from the author’s collection] 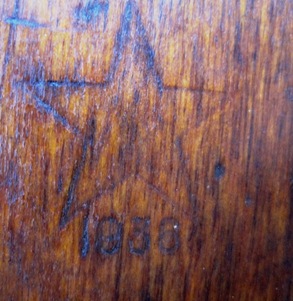 This stock cartouche was found on a 1936 Tula M91/30 with Spanish Civil War features. The majority of M91/30’s on the market today will not have these markings still on the stock. [Photo provided from the author’s collection] 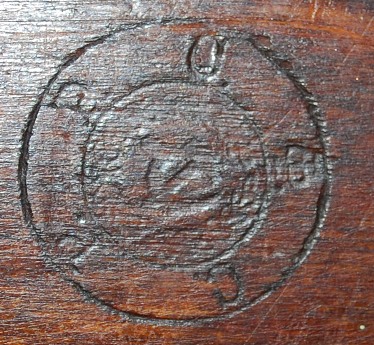 This stock cartouche is an example that would be found on a 1930's Izhevsk M91/30. [Photo provided by 'bitrclngr' of the Gunboards.com forum]